On Nov. 21, 2012, I wrote this post on my other blog that I write when I need to talk about my mom or my sister. It’s a blog that has helped me cope with my own sorrow and loss. Perhaps you’ll click on the link and read more.

Sure is good pecan pie

On this day before Thanksgiving, I woke up in a panic. Who’s going to make the Pecan Pie and gravy for tomorrow?

Although as a child, I remember my mother being responsible for making the entire delicious Thanksgiving feast, it was her Pecan Pie and her homemade gravy that she’ll always be remembered for at this time of year.

And of all the things I learned from my mother: sewing, cooking, baking, crafting, raising a child (and a husband), house-cleaning and so much more, I never paid any attention to how Pecan Pie was made. 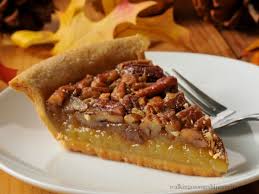 Can you believe it?
Frankly, I assumed it was something I didn’t want to know.
It’s always been my favorite pie and yet, there was some kind of mystery that surrounded its mushiness, and I wasn’t sure I wanted to know what the ingredients were.

What if I found out and then suddenly didn’t like it anymore? I know how silly that sounds, but it happens.  Once when we were at a wedding reception, my husband was eating what he thought were meatballs. I noticed and asked, “When did you start liking mushrooms?” He nearly choked and couldn’t spit the one in his mouth out fast enough, after chowing down on a half-dozen of them.

Today is the first of many firsts still to come in the next 12-months.

Today is the first time that my mother and I are not in the kitchen together preparing for what would have been tomorrow’s full-house. Back at the start of September we had already decided to ask my brother from Texas, my sisters from central Florida and their families, and my son and his wife to come to our house for the holiday that traditionally brings families together. It had become a chore for mom to travel — so everyone agreed. It had been years since we all spent Thanksgiving together and mom was really looking forward to all the chatter.

That’s what she liked the most — when her four children would start talking and reminiscing and the girls’ voices would begin to move up an octave and then another octave and we’d be talking so fast it all sounded like one continuous sentence and it became increasingly difficult to keep up with us. She’d just laugh and laugh.

After she moved in with my husband and me, Mom and I did everything together — especially at holiday time, and that included working in the kitchen with her walker (we called it her Cadillac) in tow. We might have worked together on one recipe, or we might have worked separately on two dishes.

But when it came to pies, mom’s specialties were most certainly Pecan Pie and Apple Pie and mine was the Pumpkin Pie. So, I set out in search of her recipe.

I know what you’re all thinking. “Can’t you just find the recipe online?” or “Are you kidding? Pecan Pie is easy to make.”

Well, how would I know it’s the same unless I found her recipe?

So, I spent this afternoon in the kitchen, all alone – missing her more today than the day before – and attempting my very first Pecan Pie after 39-years of marriage.

Beat 3 eggs in a bowl, add 2/3 cup of sugar, a dash of salt, 1 cup of Karo dark corn syrup (I know. There’s a recipe on the back of the bottle, but it’s not the same), and 1/3 cup of oleo (Yep, that’s what her recipe card said, but I used butter) melted. Mix thoroughly and then add 1 cup of pecan halves. (I actually used 1 cup of pecan pieces.) 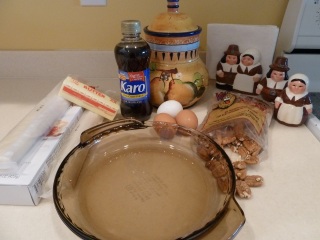 Then pour the whole mixture into a 9-inch unbaked pie shell. As you can see, I cheated, and used the pre-made Pillsbury pie crust, because I wasn’t in the mood to make my own. 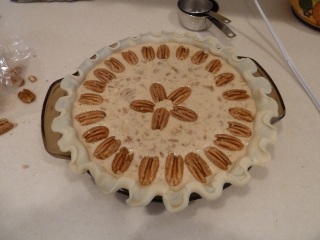 I put my own touches on it at this point and strategically placed pecan halves on the top of the pie before putting it into a moderate oven (350-degrees) for 50-minutes or until a knife inserted halfway between center and edge comes out clean.

And the finished product… 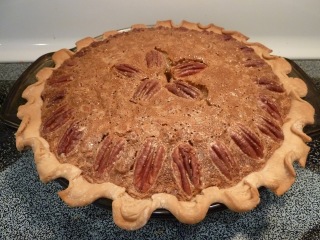 So, I hope it tastes as good as it looks. Right now, I’m pretty satisfied, but we won’t know until tomorrow.

All of our plans for a huge Thanksgiving of family togetherness fell apart after mother passed away. I’m not up to all the company and still would prefer staying in bed with the covers pulled over my head. But my husband and I will be going to our son’s house tomorrow. There, he and his wife will see to the feast this year, and who knows? Maybe a new holiday tradition will begin.

Mom, I love you and miss you. Today has been tough and tomorrow will be tougher still, but I’m grateful for all you taught me and I promise we’ll toast our Pecan Pie to you!

I hope you enjoyed my walk down Memory Lane. Mother was a great cook and I’m so grateful to have learned so much from her. I also you’ll give her pecan recipe a try.
Wishing you the happiness of good friends, the joy of a happy family, and the wonder of the holiday season. Have a memorable Thanksgiving!