Life was meant for good friends and great adventures.

As we get older, it’s likely that the most prominent memories are those that involve times spent with friends. Whether it was a good time out, a good time in, or simply a good time, those fun and adventurous memories will last a lifetime. Even when friends leave us, the memories will stay.

If you’re like me, it could be that you tend to find pleasure in the simple things. Perhaps one of the simplest, yet most important things in our lives are the moments we spend reminiscing with good friends. Those moments might not include extravagant settings or fancy food, but they always result in an abundance of laughs and new memories made.

As I was unpacking my Christmas decorations this morning, I was reminded of one such night; a holiday party hosted by my husband and me.

Several years earlier we had been camping in the Finger Lakes area of upstate New York and had visited a few wineries. All of the wineries were preparing for the annual wine and cheese tasting stroll — Deck the Halls weekend on the Seneca Lake Wine Trail.

This sounded fascinating to me, and although we wouldn’t be in town at the time of the event, I had to ask and learn all about it. We were actually in the middle of a tasting at Hazlett winery when I first noticed the poster advertising the event and asked our tasting guide about it.

She explained that folks pay an entry fee that would include the wine and cheese tastings at many of the wineries, and it would also include each guest building a wreath. My ears certainly perked up when I heard that.

At the first stop on the trail, which just happened to be Hazlett, attendees would receive a grapevine wreath with a special Hazlett ornament, created just for the event, attached to the wreath. Then as they visited other wineries, guests would receive a specially created ornament from that winery to add to their wreath.

How genius is this idea?

Here are some photos I found online of the wreaths at the end of the trail. 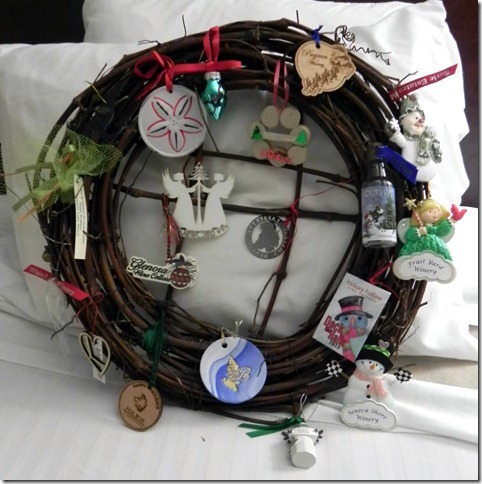 I think they are so fascinating and a great way to keep a memory.

So, anyway, my wheels were turning; I just knew we could do something similar with our circle of friends.

It took me a couple of years to get to it, but eventually we did something very similar at our Christmas party in 2004.

Instead of grapevine wreaths, I provided each of our friends with a wired ‘pine’ garland wreath, and asked everyone to bring 16 ornaments that best depict who they are.

So, for example, one friend who works for a national closet company brought ornaments that were tiny coat hangers

So cute and clever, right?

My husband is a clock maker (horologist), so his contribution was cuckoo clock ornaments.

Another friend was way, way, way into celebrating St. Patrick’s Day, so he brought Santa ornaments with an Irish twist.

And his wife served on the Board of Directors for our local humane society, so her ornaments were all different dogs.

Once everyone had attached their ornaments to their wreaths, I gave them all a big bow to also attach.  (The next day, I added a few more embellishments and the large Santa to my wreath.)

I had a great time that night, and I still have my wreath that I proudly hang indoors each year.

Friendships are no different than marriages. They require work and energy. Building and keeping friendly relationships is a two-way street that requires genuine dedication. If we sit around and wait for someone else to reach out, more often than not, we will find ourselves alone and those friendships cease to exist.

We all have to put the effort into keeping good friends; it doesn’t just happen.

And as we get older, finding new friends becomes increasing difficult. So, let’s each make a commitment to one another; let’s make that concentrated effort to remain constant in each others’ lives.

One of these days, I’m going to make it back up to Seneca Lake for the Deck the Halls weekend; it just sounds like the kind of event where great memories can be made.