I use this space to tell you about my crafting adventures, but I use crafting as my form of  therapy.

We all have “stuff” going on in our lives, right? For me, it all comes to a boil each August and September. My mother passed away on Sept. 26, and that loss changed my life forever. She was everything to me. But it’s the loss of my sister only two years ago that really put me into a tailspin.

Some people have been very vocal, saying things like, “It’s time to move on,” or “She was 78,” or other cruelties. But I don’t listen, and because I know these months are especially hard for me, I purposely keep myself busy — doing things with my husband and also spending a lot of time in my quiet, away-from-the-world craft room.

Today’s craft is what some call string art.

I don’t have a photo of my supplies, but I used a piece of plywood, nails, hammer, string or yarn, paint, wood stain, and lettering.

I already had everything, except the lettering — which a friend made for me. So, my actual hard cost was $0.00. Zero, nada.

Also, I should have stained the wood before I started, but I just didn’t think of it. It’s much harder to go back and stain the wood afterwards, so don’t be like me — stain your piece of wood first!

After the stain has dried, draw your pumpkin, then paint it. The simple way to draw a pumpkin is to draw three overlapping ovals. But her’s mine already painted.

Remember, this is your project, so you put your pumpkin where ever you want it, I happened to place mine off center to the left.

Now comes the fun part — definitely therapeutic. You’re going to hammer in large head nails about 3/4 of an inch apart. My nails are not evenly spaced. Again, do as I say, not as I do.

Then you begin wrapping the string or yarn around the pumpkin. I wrapped the string around each nail head from top to bottom, then from bottom to top — until all of the nails were wrapped. You’ll notice that I first wrapped it in jute/string, but I didn’t like that much, so I removed it all and wrapped it in colorful yarn. 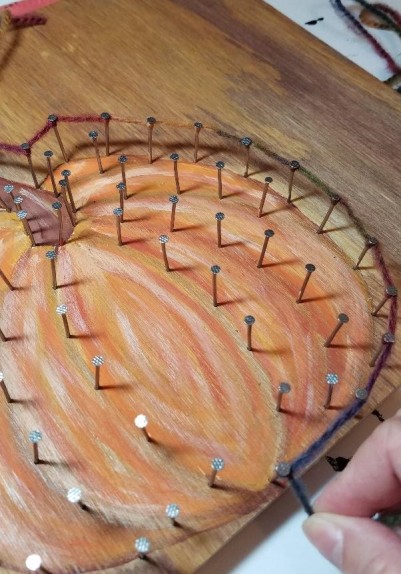 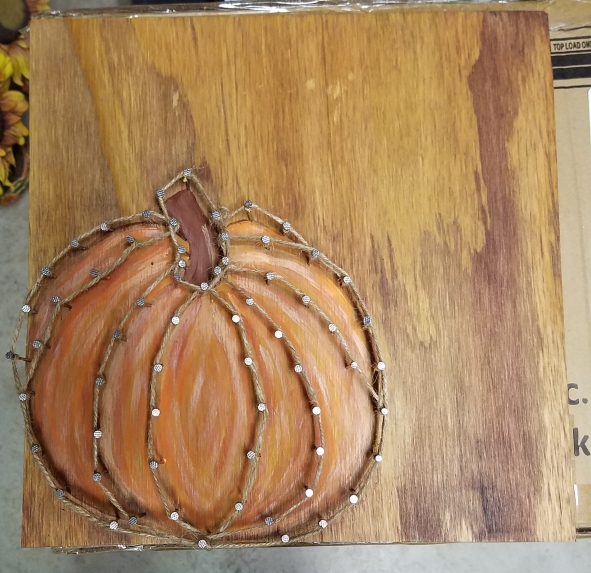 Once I had the pumpkin nail heads all re-wrapped in the yarn, I like it much better.

A friend of mine owns a Cricut, so she cut me some lettering (which can also be painted on). I attached the lettering and viola’, it’s another completed project. 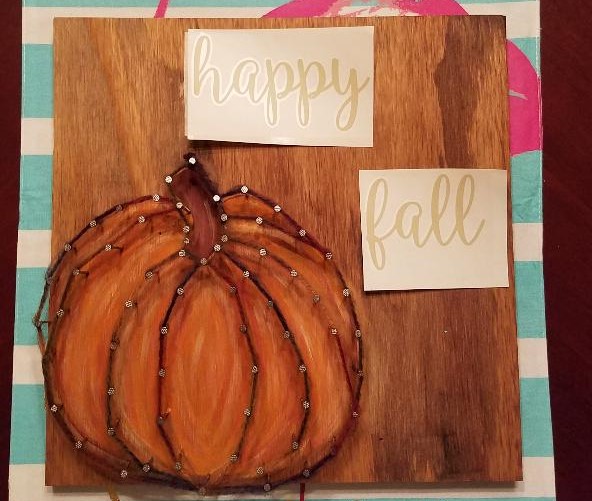 It’s cute — the lettering makes it!